The Fast & Furious: Winamp skin takes you back to the streets where it all began.

The Fast & Furious: Winamp skin takes you back to the streets where it all began.

The Fast & Furious: Winamp skin takes you back to the streets where it all began. With more exotic cars racing the streets of Los Angeles and the Mexican desert. L.A., fugitive ex-con Dom Toretto reignites his feud with agent Brian O'Connor. But as they are forced to confront a shared enemy, Dom and Brian must give in to an uncertain new trust if they hope to outmaneuver him. These two men will find the best way to get revenge: push the limits of what's possible behind the wheel..Check out the Spinning out car animation a first ever on Winamp! Download now! 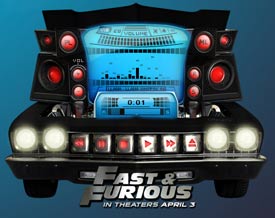 Take the ride, the start-up animation will blow you away!Cool skin that should be in your collection.

Nice - Nice looking skin but try as I might I cannot find this supposedly great animation.All I see are the usual visualizations. - June 18, 2009 by larkspeed

Right on Track - Outstanding creativity and the use of the grill and hood for the controls is neat. The work on this skin reaped dividends...at the finish line! - May 16, 2009 by richard