Finally updated for winamp 2.9x! Position bar can be enabled. If you're not sure how to do it then download it here - http://www.1001winampskins.com/skin_details.html?skin_id=2728 Added:- 2.9x windows (library and video)Changed:- Adjusted colours of text on playlist, video and minibrowser to suit most monitors.- Flipped spectrum analyser colours. (Australian spelling) Next version might have a new cursor. Thanks everyone for the feedback! 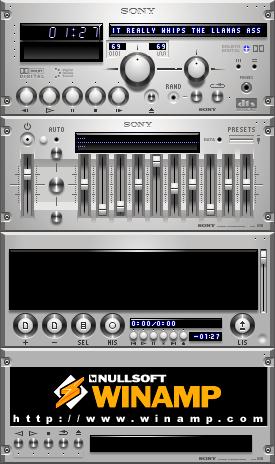 If you really want to activate the posbar: rename "posbar2" to "posbar".this skin is perfectly balanced. Better then the real thing. BUT don't play britney on this.

Excited to find it - I was very excited to find this skin, I downloaded it and tried to install it, but all I get is a message that windows can not open the file, and ask's me what program to use to open with. - April 16, 2009 by Duane Hampton

its nice - Depressing graphics but well done. The volume control is very hard to use. - February 27, 2007 by Rapid Fire

Sleek and slick - I love this skin! Such a classic look and completely unfussy but stylish. Yes, I'm a Sony geek, too! :o) Thanks for the skin. Merv - August 30, 2006 by Merv Chivers

Looks great, but... - Looks really good, but there's no seek bar! How are you supposed to jump between points in the file? - April 28, 2006 by Allah Mustafa

Very pretty - This is a real purty skin, but... The spinning pointer is annoying, a regular mouse pointer would be been better. Also, just an oversight I'm sure, but the balance knob only goes right even when it's all the way left. Overall, though, it's very pretty, and both the video window and the music library window are skinned (that's a deal breaker otherwise). - September 29, 2005 by Ein irvin

Very nice but... - Playlist inactive font simply is too dark and the current time LCD is little bit unclear (too skinny maybe). If this things will be fixed this will be one of the best classics! - July 18, 2005 by Solution Vega

Engineering at its best. - An inspired and precision piece of engineering. Very detailed and comprehensively assembled. Far and away the most superior skin in the 'Classsic' category. It makes my own efforts pale into insignificance. - February 10, 2005 by Frank Williamson

incredible - It is the most versatile skin ever. it just looks right on any desktop. combines with any wallpaper. From futuristic to retro, from minimal to gothic, this skin just always fits in. - January 11, 2005 by Tom Hespero5

favorite - this is one of my favorite skins. love SONY, they make great recievers. - January 9, 2005 by Adam Puccino

I'm Lovin' It - This skin has true class. Heck, I sold my 800 dollar stereo and replaced it with this awful sexy Winamp skin. My friends never noticed the difference. :) Out of all the classic skins, this would have to be on my top five. - March 24, 2004 by Jake Johnson

Best Looking metal ever! - I Love it. I think this is the best looking metallic skin ever. Very Clean. One tick - If I close winamp while minimized, the next time it starts, all windows are minimized EXCEPT the playlist. Seems to only happen with this skin so far. Thanks - Art - January 28, 2004 by Art Vandeley

Astonishing Detail - Well, what more can be said: easy to use, niiiice, excelent detail, probably one of the best skins I have ever used - January 20, 2004 by Artur Nogueira

:))) - I like this skin, especially shadows of slidebuttons of equalizer - fantastic. - November 13, 2003 by Arturs Kronstein

Cool Skin - Excellent work gotta give him that. I use this Skin as my defalt its sooooo cool i like how u have hidden the search bar as i said excellent gotta see more skins from u if thay stay looking this good - November 2, 2003 by DJ Jamie

Fantastic attention to details, when skinned - Love the faithful looking button recreation, the plastics have the proper amount of reflectivitiy and protrusion. Top quality work!! Needs to be completed, though: Video and Library windows are not skinned. - October 14, 2003 by Nunya biznesssss

YEAH! - GREAT skin! Definately one of the best out there. One thing though, the seeking bar needs to be fixed. - October 13, 2003 by Erik Skaare

A top skin... - Will Mooney, bless him, deserves my full appretiation. I am interested in the stereo look in skins, so that I may feel what is on my desktop is the closest experience to a real hi-fi. I am sure that one day a better skin to this effect will be designed, but right now, the Expensive Hi-Fi11 is second to none! - August 30, 2003 by Joao Bernardino

ExpensiveHi-Fi11 - IF you don't like this skin then your not human this skin is Women SEXXXXY i love the cursor everything about this is great - August 9, 2003 by Simon -

Not - Once again the Staff proves they are not the benchmark. The spectrum analyzer coloration stinks, there is no defined up/down arrows for the scroll, and there is some twisty suppository thing in place of my cursor. Sorry gents, this one missed by a long shot. Five shooters - not~ - July 31, 2003 by Creighton Cannon

One of the best iv'e seen ever! - I love this skin! Its really authentic looking, it also reminds me of my old 'Realistic' stereo (with the turning knobs), but i need to mention, the balance knob moves the same direction for the left and right side, the dot moves right both times - July 12, 2003 by steveo mc

sorry - Please disregardmy earlier comments, i was talking out of my a**. this skin is perfect. great look, very clean. who needs a real stereo, all you really need is winamp and this skin, and your golden!!! great job WILL MOONEY! - July 4, 2003 by Adam Puccino

Superb!!!!! - This is the skin that inspired me to become a skinner.When I did my first skin,which took many frustrating days,I did not understand the Winamp "rip" thing and I borrowed the buttons on your playlist.They brutally rejected my skin because of that and it about killed me.I have NEVER been soooo disappointed in my entire life.Since then I have done a few skins that they did accept and all my own designs.I can't touch this though and it still inspires me every time I see it.Thanks for the push. - July 3, 2003 by Bill Donaldson

SWEEETNESS~!! - This skin is everything you expect. I has to be the best one I ever seen! I can't even discribe how happy I was to open it and see it looks JUST like the pictures here. I grown man shouldn't BE this happy over such a little thing. GET IT ! - June 8, 2003 by G G McKee

WOW!!!!! - I have always been looking for the best skin that would give me the frredom to delete the rest of the .wsz files in the 'SKIN' dir of Winamp. THIS IS IT!!!! Thanks. This is just perfect. There is no way any skin can defeat this..... - May 30, 2003 by Souvik Chatterjee

I can't give 6 stars for you. Is a piece of art!!!!! - You're a master of skinners. Xtraordinary work and imagination! Only some details like the "gost" seeking bar are the problems on your skin. Excellent!!! Skin the 2.9 x-tra windows please (and nontify me to download again!) - May 17, 2003 by Daniel Cabral M.

Wow! - Awesome skin! Especially the EQ bars! Those of you who think this skin looks boring, download it anyway. You'll understand. - April 29, 2003 by Tarkan2467

DAMN!! - This is GREAT! the only downs are that you cant see possy bar but its still there. if you click in the wrong spot the song will jump to another spot. i also couldt find the volume and balance right away. Its still one of the best skind ever. - April 12, 2003 by Willy Schiller

Seriously the Best! - This has got to be one of the best skins ive seen, the way its laid out and colored beats all. Oh and its sony :D - March 3, 2003 by Michael Fowler

Superb skin! - I have seen many skins, but this one is simply the best i have seen so far! What a skin! - March 2, 2003 by Tommie van Ostade

this skin is phenominal - its about time will put his skin on winamp.com. this skin has been tucked away at 1001winampskins.com for soo long. most popular, highest rated, most talked about skin on that site. i mean, the cursors of this skin are worth the download itself. if there is one skin i advize to download , it is this one without a doubt. the best work i have EVER seen. the only skinner i now follow.!!!! - February 21, 2003 by bart vandenberg

=) - THIS WINAMP SKIN IS A KICKA** SKIN!!!I LOVE IT.LOOKS EXACTLY LIKE A REAL SONY ENTERTAINMENT MUSIC JUKEBOX CONTROL PANEL.THIS SKIN OWNS ALL.THE OTHERS CAN SUCK MY YOU KNOW WHAT. =) - February 17, 2003 by Tony Zhao

Very expressive lights. - Paul Klee gotta see how the expression for the lights made it look more realistic. - November 30, 2002 by N. E. Aykam

TITS - This is, without a doubt, the best fucking skin I've ever seen. The detail is so good it looks as if the actual stereo were transplanted onto my desktop! The only reason I got an account is to review this thing! The preview does it no justice, download this skin now! - November 26, 2002 by Derek N/A

Well DAMMMMMn! - By FAR the smoothest skin I've ever seen. I didn't think anything was ever going to dethrone the classic Marshall stack, but this has done it. I too, registered for the sole purpose of singing it's praises. - November 8, 2002 by Ray VanRiette

Perfection! - There have been skins that I loved in the past and still do, but this one blows them all out of the water. This one would get 100 stars if I could give them. You couldn't make a prettier skin if you put Britney Spears on it. ;-) - October 14, 2002 by Lee Groomes

silver hot stuff - I love the color in this skin, and the desing is awesome. Don't really miss the posbar :) - October 1, 2002 by Juan Bosco