Complete skin with cursors and MikroAMP. 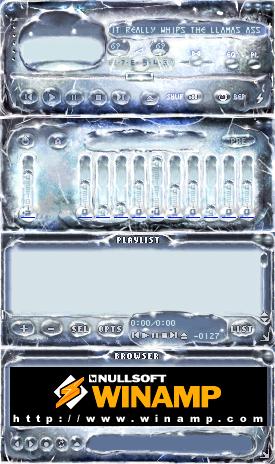 Wow... - I Loooooooooooooooove thiz Skin u've made! I'LL uz thiz ALOT for my winamP Skin for Sure - July 8, 2008 by Elizabeth Murray

Antartica Back On Ice - I really like how it is set-up and also how the design had been well thought out. But I was sit here and wondering is that if you could change the colour of the skin. Make it more taylored towards how your feeling. You maybe angry and upset towards something or someone, but yet you may want to add some colour to curb your moodiness. - January 19, 2008 by Nicole Seichter

Nice And Frosty - Very Well Done. If OnlyMy Favourite Drinks WouldCome Out That Cold From TheFridge Within A Few MinutesInstead Of A Few Hours. ButThanks To The Freezer, MyDrinks Come Out FeelingNice And Cold and are alsoColder To Drink When I Have Ice In Them. - November 4, 2007 by Joshua Wells

*claps* - This is a very nicely done compact skin. I personally think is wouldn't be bad to see a full size version or at least one with size control be avalable - February 5, 2007 by D_W_Thomas Consaul

Great! - This is my favorite classic skin ever. The ice theme is consistently incorporated into every aspect of this skin. I especially like the refraction effect on the volume bar. Beautiful work. - September 18, 2006 by Pascal Getreuer

Very nice - Very nice skin. Everything seems to flow together and fit in nicely. I especially like the volume bar. It's...... different. - July 20, 2006 by Dallas Epperson

asthetically hot - I like it -- still kinda very old school, puts a li'l new with it, nothin' cut very fancy or anything like shapes 'n' stuff comin' out lately but it's still very nice. - June 13, 2006 by Lilliam Infante

slurp :d - it makes me fetch things from the fridge sometimes ;p - August 5, 2005 by Karolina Milewska

Crackling Sharp - A rare classic skin that includes the library, and absolutely stunning graphics. One of my new favorites. =D A little hard on the eyes after a while, but it's such a perfect theme I don't care. I don't care for the light blue background, but once I swap it for a darker color it's purrrrfect. - July 10, 2005 by foxyshadis _

Gorgeous :-) - A lot of work went into this one! The background is just lovely. Some nice creativity too; works very nice within the limitations of a classic skin. The slider bars are excellent, as is the button "light up" effect when clicked. I really like the "round" windows around the display areas. One minor quibble: some of the buttons are not as easy to read as they could be. All in all though, this skin still deserves five stars. - May 25, 2004 by Cal Moore

AMAZING! - Wow! This is the best skin I've never seen! And absolutely evrything is skinned (including Media Library). Congratulations to its owner! - March 17, 2004 by David Pozo_Navarro

Media Library Support = Good - Great job on this 'cool' skin. Really love that you added support for all the new windows too. Keep up the awesome work. - September 13, 2003 by Thomas Knight

Ohhh, this gives me goose bumps! - This is really, really good, I love it.It looks like real ice and its just soooo cool!(Excuse the pun. I cant wait to see the next one from Richard Pettifer. - August 11, 2003 by Sean Kelly

outstanding - everything you need in one skin. functional, original and looks fantastic. if i could, i would give it more stars. great job ripe :) - May 14, 2003 by binary hero