This is a skin I've been working on for a long time. Fully skinned and featured.

- A fully configurable notifier, which was modularly designed to be easily used with your future skins

- 10 Color themes (Try the Color Editor to make your own)

Well ya. there it is

*Note that this skin is only compatable with Winamp 5.02 and above. 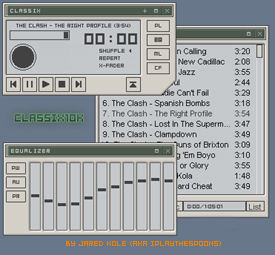 Unique, Simple, Obvious Look - I love this skin. I've been using it almost as long as I've been using Winamp. I do have one complaint. The ML button seems to be a bit miscolored. Also, I like the circle for the time-tracking, but I think, since it is so small, a bar would be better, maybe with a clock icon next to it, and a speaker icon next to the volume bar. Just a thought. Other than that, I think this skin is great and uniquely simple and straightforward. - April 7, 2009 by Gerry Alvar

i love this skin. - it's everything i've been looking for. it looks great, is tiny, customizable, and fully functional. the only thing i can't figure out is how to customize the notifier. i've been trying and maybe i'm just overlooking something but i can't figure it out for the life of me. i already have a notifier that i like a little better, so it would be nice if i could turn off the one that comes with this skin (even though it's a great feature). if someone could tell me how to do this, that would be great. - May 3, 2006 by jo c

Amazingly clear and well designed skin - After years of using the colorful Summerbreeze skin, had to look for a new one. Why? Because I installed the iPod plugin and am now using Winamp to manage this as well (before I never used the media library- ML) and the Summerbreeze theme is way too yellow for staring at the Media library for more than 3 seconds... This Classix skin is absolutely amazing and this review became way longer than I intended. To summarize, outstanding features are: - very well thought out design (buttons, placement etc) - clear, minimalist, customizable color scheme - neat track notifier feature The problem with most skins is that - in my opinion - color schemes are used that might work well on the player/equalizer itself but not within the ML, where legibility is a priority. The skin is very flexible - title bars and styles are changeable, and with color picker you can even pick your own color. The volume bar and fast forward/back button are very well designed. The volume bar is only slightly thicker than regular skins, but these extra pixels make it much more easier to change the volume. Likewise, the circular shape of the fast fwd/back is probably the most intuitive way to scroll. Even the Shuffle/Repeat functions are well thought out, a small arrow notes whether it's on or off. Much better than the bold/non bold or slight color change that is the convention. Finally, there's a neat little feature that I never encountered before, which is the track notifier. (similar to Outlook 2003 with new mail) It pops up when Winamp is underneath other windows and a new song starts. Again, this is customizable in terms of length and even fade in/out time... Any complaints? Well, there's 2, one minor, the other a bit less so. The minor is that the main Winamp player is slightly less wide than normal. I usually have my playlist editor beneath that, and keep them similar in width. The current width is just slightly too short to display most tracks in the playlist editor. Of course I can still widen the playlist window but this ruins the symmetry... (told you it was a *minor* complaint!) The slightly more serious complaint is the fact that the adjustment of the color schemes only accounts for the title bars. I think it would be great as well if the user could change the overall color of the player (currently beige) and the background color in the ML etc (now grey). Overall however, I am very very pleased with this skin. (BTW I wrote this after trying a dozen or so new skins and browsing through all the categories... I've been using this skin for about an hour or so. So perhaps I might even discover some other things later) Jared, keep up the great work! - May 24, 2005 by Rich Tee

sweet as - This skin rocks, it sits nicely on my right monitor out of the way.....however since the lastest winamp update it no longer displays the album covers - May 15, 2005 by Dominic Shooter

Most Usable and Attractive - When I download a skin, 9 times out of 10 i can't understand how to work it or fit it comfortably on my screen. With this skin, I easily access it and it's not junked up with unnecesary graphics or any ridiculous shapes. this skin is the most efficient i've ever used and I look forward to an update on the skin. The only shortcomings would be that there is no volume dial on the compacted version and also no button to automatically access my library. - April 12, 2005 by John Brubaker

Very cool, but has problems - For some reason, this skin "breaks" for me pretty often. In windowshade mode the right 1/3 just turns completly white and theres no way to fix it without reinstalling the skin. Very sweet design but needs to be fixed to be usable. - January 16, 2005 by Alex Wendler

Nice - Exactly what I've been looking for -- a functional skin that isn't all bogged down with "features" (read: crap). Great work! - May 29, 2004 by Mike Hemmerling

grrrreat skin! - i love this skin! i just saw a bug though... on the popup thingy it shows the number of the song playing but its 1 less than the actual number on the list. - March 17, 2004 by Brandon Holland

Classix - Great skin - nice and simple and clean. I turned off the grapic eq display, maybe another softer color scheme or something would be nice. - March 16, 2004 by Trevor Turk

A model of simplicity - Simple, elegant and functional. - March 15, 2004 by Bidit Mazumder

Superb - A very, very stylish skin. Just what I was looking for. (Just a shame the playlist windowshade doesn't stretch) - February 20, 2004 by Sir Icey