is your answer to all your Chevy Rock in Roll racing needs. Driven by Dale Earnheart Jr. On September 6 the Winston Cup series is going to add even more attitude when some of today's hottest acts pair up with Chevy's hottest drivers at the Rock & Roll 400 in Richmond, Virginia. With cars designed by the artists, this is a race that's sure to be remembered by NASCAR fans for years to come. User interface and coding by Petrol Designs. 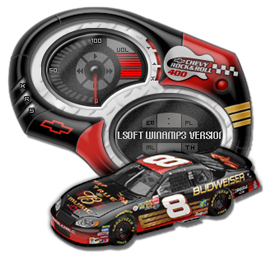 Great - I love this skin its about time someone made a nascar skin.Could be bigger though. - July 30, 2003 by Stephanie williams