The #29 Car Chevy Winamp 3 Skin...is your answer to all your Chevy Rock in Roll racing needs. Driven by Kevin Harvick. On September 6 the Winston Cup series is going to add even more attitude when some of today's hottest acts pair up with Chevy's hottest drivers at the Rock & Roll 400 in Richmond, Virginia. With cars designed by the artists, this is a race that's sure to be remembered by NASCAR fans for years to come. User interface and coding by Petrol Designs. 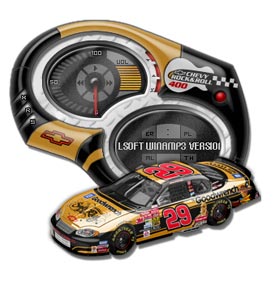 It's Nascar season y'all.

:) - "==Q: what's more stupid than a dog chasing its own tail? ==A: A bunch of rednex racing in circles hundreds of time. If only you'd made this an F1 skin.." Yes, because watching a group of cars parade around a boring road course is so very exciting. Funny how it's so easy to generalize a sport huh? The fact that you gave the skin 1 star because you are anti-NASCAR only validates your seemingly low level of maturity. As for the skin, it is very well done. Thumbs up. - August 28, 2003 by john doe

???????????? - its a great skin..... i must say that i cant for the life of me understand why the admins allowed andy probers review through.. its degrading as well as insulting to many ..im offended by his remarks.. it's one thing to not like a skin but to act like a 12 yo tenny bopper and bash a good many people is just childish... i guess he couldnt read the words above the window that says "say what u gotta say here but please remain civilized ......and shame on the admins for letting such a vulgar review through...... - August 4, 2003 by d w