Red Alert 2 Skin. This is only begin 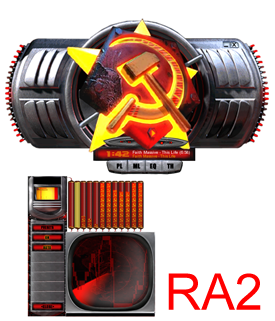 Quit big, fairly well done, although the equalizer bars seem to have no relation to the presets. Also would have been better to have some things move to the beat instaed of just going back and forth.

Powerful Design - The design has a powerful look. The central colors draw the viewer in. Though a bit "bulky," it does show good creativity, with dials that are easily accessible. - April 1, 2009 by Richard Coreno

feeling like at home - i'm russian born there and that's why i want this skin - July 22, 2008 by fabiana galkin

it's nice - I was suprised that opening file is in a hammer! a love this pulsing star. unfortunatelly i can't se equalizer i full view - May 21, 2008 by Katarzyna Cielak

Affirmative! - At first look the skin is graphically amazing, really captures the theme from the game.However it is let down by a lack of interaction, and a lack of efficiency.If this was to include more performance helpers, it would be a great skin.-m - February 1, 2008 by Mike Lomax