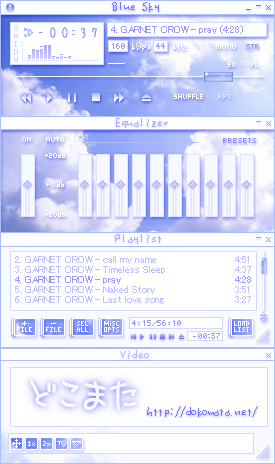 And now for today's wheather report,

A soft blue cloudy sky, with the possibility of an occasional shower.

Not bad but not very easy to read? - Everything's visible and the picture is wonderful. I love blue and white and it looks really soft, but the contrast is just a bit too low for me to look at it comfortably. I find myself having to squint a little to read the playlist and to look at some parts of the player. - March 12, 2009 by caffeine lowe

came out pretty nice - Colors are very light but yet the words in the playlist editor are easily readable... Buttons on the bottom of the playlist editor are a teeny-bit hard to read but you are still able to tell what they are used for since they have words printed on them... Image used in the main and equalizer windows match nicely giving a sense of unity... Babs - January 18, 2006 by BubblyBabs ***