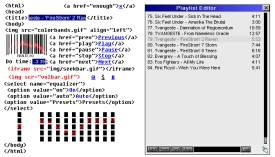 The concept is certainly original, and with some interesting ideas, but it's practically useless. You have to pixelhunt each and every time you want to click on some button, and the sliders are worse. The other windows aren't visually appealing as well.

why transparent? - The thing that really kills this is the transparency. It's hard to read it against most backgrounds, and almost impossible to click on the buttons at all without accidently clicking what's behind them. I would strongly suggest redesigning this skin with the html against a solid background. - October 21, 2005 by Luigi Hann

Huh? - The author made and damn right awful design-choice here :-S ... Granted, it's original, but you have to wonder if the author actually uses this on a daily basis himself? bunji - October 19, 2005 by bunji design