Nothing to do with asses or osmosis.

Nothing to do with asses or osmosis.


Here is another golden oldie skin for you all to play with. Originally a Winamp3 skin by our very own Steve, it's been whipped into shape for Winamp5.
Please enjoy it and share it with your friends.
It was inspired by Probe from Kinwashi and a few other sources.
Thanks to nIRV who did most of the original coding behind this skin, Francis for his help towards the end, Lucas and all the others that lent a hand!

No asses were harmed while making this skin. 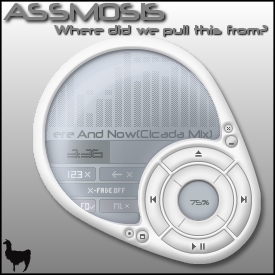 No asses were harmed while making this skin.

But how about a certain Llama? I hear Mike still don't trust Steve. Anyway, Nullsoft Skinz is proud to present this latest tastie from the archives, and it is not available on DeviantArt.

Nice, but missing some things. - The good news is that this is a clean, functional, modern-looking skin that's laid out pretty well - in normal mode. The bad news is that the windowshade mode (which is the only mode I use, most of the time) is lacking. No visible volume control and no horizontal resizing have made me shy away from this skin for day-to-day use. Aside from my personal issues with this skin, it's certainly a nice showoff skin. - August 10, 2006 by Brock Alexander

Best windowshade - 4 stars only because of the name ;), naw, because I couldn't really read the shuffle and repeat buttons until I looked. - July 5, 2004 by T W

ok skin - This skin has a good winshade mode, notifications and decent colors. But the main window is kinda hard to read and has a strange layout. - June 4, 2004 by Pascal Getreuer

The best of Probe, but much more. - The re-release of this skin has to be the best WA3 to WA5 conversion so far. It has the sleek design of Probe. It's detailed without bloat. But that's where the similarities stop. Assmosis has everything a WA modern skin could ask for. A circular control panel, small mode, notifier etc. There was even features I didn't know existed, such as the custom font for the tooltips. Awesome work. 5 stars! - June 1, 2004 by Leon B

What god says: - This is freakin' awesome! The interface is very good lookin' with detailed buttons that doesn't look like they've been created in paintbrush. And as an extra bonus, the skin also have a "light-weight-mode". If u gonna downlad just ONE modern skin, let it be this one. - May 26, 2004 by Peter Manning

What gods says - This is an incredibly good skin. Bright, detailed and stylish. Fresh air for the Winamp skin section. Good woork dudes! - May 21, 2004 by Peter Manning

Assmosis is back - I just love how this skin looks. And that is its strongest point. Because I do think a few improvements would be nice. The main and stick mode need a playlist button and resizing of the stickmode is essential! - May 21, 2004 by Hawk .

I though it would be a Probe clone... - ...and the resemblance is definitely there, but Assmosis really adds to its inspiration. This one's got color themes and a winshade! It sports a very clean and easy to use interface and an excellent winshade mode. The 15 color themes may seem paltry compared to other skins, but you can be sure that only the best are here. This one will be definitely be in fequent use from now on. And sorry, guys, the only thing on this skin that has anything to do with asses or osmosis is the color theme "ALT 69 (try it!),"" which appears to be the exact same theme as the default, unless I'm mistaken. Overall, an excellent skin well worth the short download (it's only 200-some k if I remember correctly). - May 20, 2004 by toejam 07