For all you anime fans and Who Ever.

This Winamp Modern skin has some very cool new features. From the sliding frame doors to the
animated display open/close. 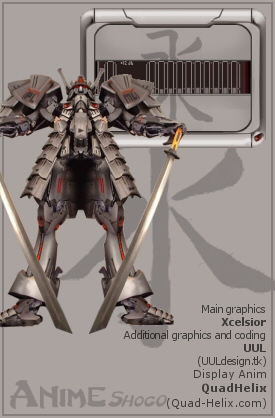 Not sure even where to start...

It's very detailed with more options than you'll know what to do with, it's a little tricky to use, but I guess that's what the instructions are for, as a media player it's an oddity, you'll either love it or you'll hate it.

SAY WHAT!?!?! - Dude.....wait....hold on. OK... WoW! This is absolutely amazing. It functions so well and everything is integrated flawlessly throughout the whole presentation. I have been downing and using winamp(.exe,skins,vis) but not once has anything stuck out at me as amazing. This shouldn't be so far back in the most downloaded section... If someone don't got a robo-samaruai blocking that spam then something is seriously wrong... xD So I made this account just to say this..U DA SHIZZ!! ^^ - May 18, 2007 by Lance Jordan

O.O - wow this is fricken complex >.> i mean seriously how much time did you put into making this cause well HFS this is awesome - February 5, 2007 by D_W_Thomas Consaul

Killer! - This is an absolutely killer skin. Lots of nice little features. - September 10, 2005 by Robert Norton

uber l33tness - SWEET. that i the only word i can think of to describe it keep up the good work. ps contrary to what most people said i found it pretty easy to use - February 18, 2005 by Ben Wilmot

Great and... confusing. - Wow. This thing looks amazing and the layout is... interesting. If you want to take the time to learn the controls, go for it; It looks sweet. Too cumbersomb for me. - January 21, 2005 by Cameron Brown

A good project as a design, but not as good as a skin - By far one of the most unnusual and awesome skin designs I\'ve seen. But the visualisation is too small (visualisations are an important part of a Winamp skin). Windows other than the Main window are hard too move due to the large titlebars. The playback buttons and flashing diodes on them are a good idea though. And some colorthemes would be nice. - January 15, 2005 by Eps B

Precize - Its very nice and precize skin and has a lot of options. - January 4, 2005 by SnakeSK Z

"ludic skin" - one of the most original skeen i ehad eve seen. not easy to use to the begining but with the menu it become easy. I have to say that i discover some fonctions i didnt now. Its a "ludic" skin Bravo L'artiste. - December 25, 2004 by pierre pierre

An offer easily refused - I personally think the idea and graphics are good but the button placement is horrbile and i found myself finding buttons that did nothing so the visual aid is greate but the important part is horrible... 3.6 - December 25, 2004 by Eric Smith

bitronix review - very hard to use this skin. do not understud buttons. - December 19, 2004 by Bitronix [ďż˝ďż˝ďż˝ďż˝]

Hmm - Not very good skin beacuse it's hard to find the buttons. If you click on his mouth and turn it into the sword thing then its a good skin. Should do a release of just the sword as a skin I think. Would be much better that way. - December 16, 2004 by Andrew Fox

cool - just like tell people with skill that they did good. - December 2, 2004 by David Meloon

Good skin, hard to find buttons without instructions - this is certainly the most creative winamp skin I have ever seen... The buttons are difficult to find but thanks to the instructions that is no longer a problem. - November 21, 2004 by Brandon Atkinson

Wow - This skin is an amazing skin, the interface in which is used is great, evnen though it takes up a greater amount of memory than some other skins I've used, this one I love even with the extra memeroy loss. - November 7, 2004 by Toreba Eriatto

Its the best skin I ever saw - ahuahuahauhau is the best fucking robot... - November 5, 2004 by Luiz Pudianovysky

great skin. - Now this is a great skin very well detailed.I also like the colors that this person chose.Very nice. - October 19, 2004 by Denise Jenner

Great graphics - This is a great skin and I think the graphics are great - October 10, 2004 by victor E

2 for the moster look only - good look bad finctions that describe this skin . - September 7, 2004 by Maher Korek