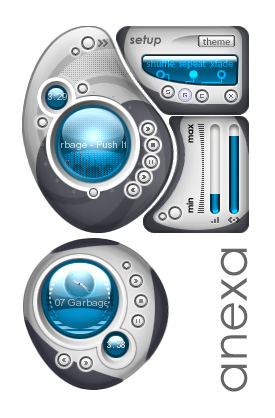 a nice skin, but a few minor graphic and code fixes could make this really stand above the rest.

anexa~~ A++ - Very nice, beautiful, functional. Easy to use and takes up a small amount of space~ comes in different colors too! What more could someone want? - January 22, 2004 by Dj Phoenix

lol - This sucks ass, I downloaded it and it wont even load, SHITTIEST SKIN EVER. - December 16, 2003 by Tia Dickerson

Nice - This skin is one of the best I ever used, kinda pretty, keep on puting skins like this - December 16, 2003 by MaoR Halpern

nice but buggy - gets my winamp twisting and turning to survive. too bad it's futile, cause the skin is too buggy. can't wait to see the final version though, cause the design and extra functions really rock! I'll stay up to date and up and running to give 5 stars as soon as it doesn't crash my winamp anymore. for some reason it influenced my entire winamp, even when using other skins, so you might want to check the code :) just a thought. - December 13, 2003 by Arvid Verstraten

Good - This is a buetiful skin but it could use i mini mode. I really like the alarm because I'm one idiot who does not look at the clock unless it is frozen. - November 25, 2003 by Jesus Christ

Totally Sweet - I can't figure out how to get the round ball version either. If someone can pls post the secret, that would be stellar. TIA - November 23, 2003 by Julie Rhymer

nice but not so wonderfully intuitive - I like the look very much, but the features I want are just not very easily accessible. No volume control on the main window? No, um, CLOSE button on the main window? Pamela: you're not alone, I can't figure out how to change to compact mode either. Anyone? - November 17, 2003 by c n

I really like this skin - But, I feel dumb. I can't figure out how to get it in the 'small round ball' mode. It's in the default mode and I've looked at all the tool tips, pushed all the buttons tons of times. I don't get it. - November 16, 2003 by Pamela Ferdinand

sweet but could be slightly better - this is a excellent skin. clean lines, good look, over all a great skin but the clock is to hard to see and u need a volume controll on the main section ... other than that its a well put together skin and id luv to see a updated version :) - November 7, 2003 by d w

Nice - Looks best on Winamp3/Wasabi Player. This is because the standardframe is used differently in Winamp 5. No problem for me though :) I would have liked a vis of some sort behind the analog clock in the main window, or to have it like you had first, with the big clock in the same screen as the vis and songticker, I liked that.. Overall, not as featurepacked as I expected, but nice. -Plague - November 6, 2003 by Linus Brolin

Cool. - Though the smaller main window should've had volume control, shuffle and repeat of its own. Now they are just too hard to use, as you have to make it big again and open the side menus. :/ - November 5, 2003 by Veli-Pekka Finnila

Yet Another Freeform Skin - Another "cool" plastic looking player brought to life, complete with a glassy looking viewport with many color options. Other than that, it is not so bad. Nice looking, but it feels a bit small when using it - you need a surgeons dexterity to hit the buttons properly every time. Neatest feature: the one click eq presets. Most useless feature: the "resart track" button that does the same job as just hitting the play button. Best feature that really doesn't follow through: the clock mode in which you can only make out the hour hand when it is between the 3 and 9 o'clock. And agg, there is no close button on the eq window!! - November 5, 2003 by Joe Hill