Skin based on official army game.

Skin based on official army game.

Main aim for me was to keep this skin plain and easy to read. Also, it was important to make it familiar to all AA players. So I used in-game screenshots and graphical elements from official website. 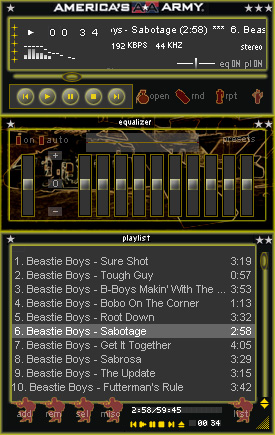 Nice looking skin, will appeal to fans of the game everywhere.

DUDEEEEE - I was just checkin out skins come across this awesome skin. It is very cool indeed, and I am a huge fan and fully involved in the AA game. So I just found my new skin, and I must say to the artist who made this work of art,HOOAAHHDanny - February 27, 2008 by Danny Fagan Sr